Oxford Instruments is delighted to announce the winner of the 2018 Lee Osheroff Richardson (LOR) Science Prize for North and South America as Dr Kate A. Ross, Assistant Professor, Department of Physics of Colorado State University, USA.

Dr Ross is recognized for her research towards elucidation of exotic magnetic ground states and ground state selection in quantum frustrated magnets, using neutron scattering techniques at low temperatures and in high magnetic fields. The LOR Science Prize selection committee was very pleased to recognize the comprehensive nature of the studies led by a young scientist like Dr Ross, who is both very accomplished and also has had impact in the field of quantum and frustrated magnetism.

"It truly is an honour to be the recipient of this award. Exploring quantum magnetic phenomena in materials has been a difficult, exciting, and diverse subject. I am particularly lucky that I have had many great collaborators, and work within a supportive community. It’s a great honour to receive the Lee Osheroff Richardson Science Prize recognizing this work", commented Dr Ross.

Kate Ross has championed a remarkable body of experimental work that established what we know about a set of quantum frustrated pyrochlore magnets. During her PhD at McMaster University, she grew large single crystals of rare earth titanate pyrochlores, appropriate for neutron scattering measurements, and carried out sophisticated time-of-flight neutron scattering measurements at dilution refrigerator temperatures, and in magnetic fields up to 8 T. This single crystal, inelastic neutron scattering work, carried out from 2008 to 2012, was among the first to fully characterize a four dimensional data set of S(Q, E) (three Q dimensions, one energy dimension) to fit the high magnetic field spin excitation spectrum to linear spin wave theory.

Kate also played a key leadership role in both the experiments and the manipulation of the data sets in a program of neutron and x-ray diffraction measurements in very high, pulsed magnetic fields. These challenging experiments were carried out in a collaboration between the McMaster group and Hiroyuki Nojiri (Tohoku University), Garrett Granroth (ORNL) and Zahir Islam (ANL). The work resulted in two Phys. Rev. Letts. and instrument development papers and resulted in Kate giving two invited talks on the work.

Her topical body of work has attracted much international interest and significant recognitions. Five years past her PhD, she has 37 lifetime publications and an h-index of 21 (Google Scholar). She was awarded the 2017 George Valley Jr. Prize from the American Physical Society for outstanding early career contributions in any area of physics, the first female physicist to be recognized. Earlier, she was awarded the 2014 Alice Wilson Award from the Royal Society of Canada for early career excellence by a Canadian female scientist in any area of science. In 2016, Kate was appointed to a CIfAR Azrieli Global Scholar within the Quantum Materials Program.

The objective of the LOR Science Prize is to promote and recognise the novel work of young scientists working in the fields of low temperatures and/or high magnetic fields or surface science in North America. Oxford Instruments is aware that there is a critical and often difficult stage for many between completing a PhD and gaining a permanent research position. The company has therefore been helping individuals who are producing innovative work by offering assistance both financially and through promotion of their research work, through sponsoring the LOR Science Prize for North America for research in physical science. The Prize is named in honour of Professors David M. Lee, Douglas D. Osheroff and the late Robert C. Richardson, joint recipients of The Nobel Prize in Physics 1996 "for their discovery of superfluidity in helium-3". 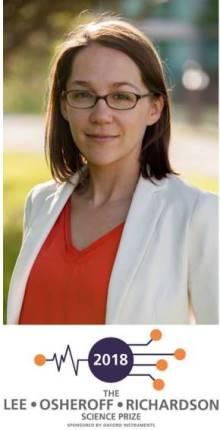