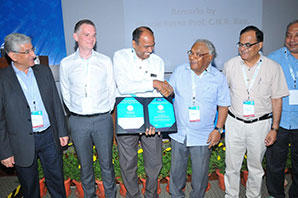 Oxford Instruments is delighted to announce Professor Narayan Pradhan of Indian Association of Cultivation Science, Kolkata – as the winner of the Young Nanoscientist India Award 2017. Professor Narayan Pradhan was presented with the trophy on April 27, 2017 by Bharat Ratna Professor C.N.R. Rao for his outstanding contribution to Nanotechnology in India, instituted by the Nanotechnology Forum 2017 and organised at Jawaharlal Nehru Centre for Advanced Scientific Research, Bangalore in India.

The NT Forum was formed in 2014 to recognise and support young researchers in India, undertaking research in the field of nanotechnology. This year the Forum received 34 nominations for research carried out by eminent researchers from across India. Dr Pradhan’s winning research entry is titled as “Doping in Semiconductor Nanocrystals for generating new material properties.

On presenting the award, Bharat Ratna Professor C.N.R. Rao, Chairman of the selection committee said, “It is heartening to see that for the second time in a row, the NT Forum has attracted nominations reflecting the very high standard of research that is carried out in India. The committee had a hard time in deciding on the winner. Dr Narayan Pradhan has been selected on the merit for his outstanding contribution to nanotechnology in India. The committee is very pleased and believes that this award will further motivate nanotechnology researchers in India, as it also provides them with a global platform for recognition.” Professor Rao also emphasised on achieving milestones through research activities and wished to focus on diversified Nano applications like Nano Bio and Nano Medicine, which would help the society to a large extent.

“Oxford Instruments congratulates Dr Narayan Pradhan for winning this award. At Oxford Instruments, we believe in promoting and recognising the novel work of young scientists, undertaking research in various fields of nanotechnology. We would like to thank the committee members of the NT Forum, chaired by Bharat Ratna Professor C.N.R. Rao for their continuous guidance and support”, said Rajesh Jain, General Manager, Oxford Instruments India Pvt. Ltd.

As winner of Oxford Instruments Young Nanoscientist award 2017, Professor Narayan Pradhan was awarded with a certificate, medal and cash prize of INR 200,000/- (Rupees two lakhs) for his achievement. NT forum has also arranged for his tour to deliver talks at a number of foreign universities as an invited lecturer.