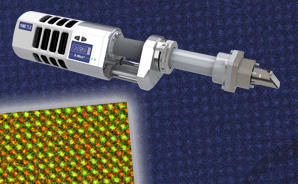 Nanoanalysis at the atomic level

Oxford Instruments, a leading supplier of microanalysis systems, has launched a new detector for Transmission Electron Microscopes (TEM) that provides a sensitivity unsurpassed in Silicon Drift Detector technology. The X-MaxN 100TLE is the perfect solution for field emission and aberration corrected TEM users working at the frontiers of nanoscience.

The X-MaxN 100TLE exploits a new 100 mm2 sensor, a windowless configuration, and an innovative mechanical design that delivers ultra high solid angle. The detector delivers an unrivalled sensitivity for all elements, especially low energy X-rays. For example, the effective solid angle is twelve times greater than a traditional 30 mm2 SDD for N Ka X-rays. This means that the user will be able to detect much lower concentration of elements, for example impurities and dopants at the nanoscale. Another benefit is the collection of more data before the beam degrades sensitive samples.

According to Oxford Instruments NanoAnalysis Marketing Director, Del Redfern, “This product is our flagship Silicon Drift Detector; it represents a leap forward in sensitivity and speed. During trials on an Ultra High Resolution TEM we were even able to produce an atomic column map in less than sixty seconds.”