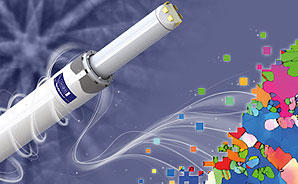 Oxford Instruments, a leading supplier of microanalysis systems, has launched NordlysMax3, an EBSD detector that acquires indexes and displays results at 1580 points per second. This performance is sustained during simultaneous EBSD and EDS acquisition. This is the world’s fastest commercial EBSD system; full EBSD maps displaying sample microstructure are completed twice as fast, which can represent a saving of many hours.

According to Dr. Jenny Goulden, EBSD Business Manager, “NordlysMax3 provides the same sensitivity as our previous detector but delivers almost double the speed. It also represents a breakthrough for those performing in-situ experiments where data are collected under dynamic conditions, such as increasing strain or temperature.”