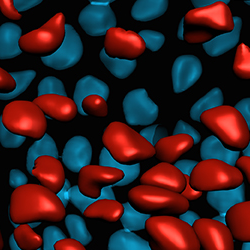 Imaris 9.0: Explore your most complex datasets with the Billion Triangle Surface model

As a result of new microscopy techniques and modalities that offer increased resolution across vast temporal and spatial scales, the size of imaging data has rapidly increased in recent years. Researchers are now confronted with the task of analysing these extremely large and complex images. Building on Imaris’ strong foundation of large image visualization, version 9.0 addresses this need with a solution to calculate and interactively render the results from these images using its unique 3D Surfaces model.

The improvements in file handling and processing speed permit the creation of Surfaces from images that were previously impossible to analyse. In addition, Imaris 9.0 uses a unique method to provide smooth rendering and interaction of Surfaces created from files hundreds of gigabytes in size. This technology allows Imaris to render massive Surfaces that are defined by billions of triangles.

The Launch of Imaris 8.2 and ImarisLineage