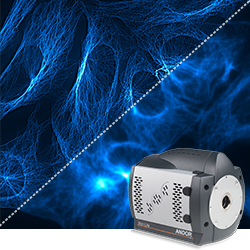 Adopting the recently developed SRRF (pronounced ‘Surf’) technology from the lab of Dr Ricardo Henriques, Quantitative Imaging and Nanobiophysics Group, University College London (UCL), and working in close collaboration with Dr Henriques, Andor have enhanced the technology to run optimally on iXon EMCCD cameras. Andor is also expert in advanced GPU processing optimization techniques, employed in this instance to execute the SRRF algorithm up to 30x faster than the existing ImageJ-based post processing implementation of SRRF. This significant acceleration enables workflow enhancement, by allowing data acquisition and SRRF processing to operate in parallel. Since processing is faster than the camera can acquire data, SRRF-Stream now accomplishes real time super-resolution, with large field of view super-resolution images. An EMCCD full field of view super-resolved image can be readily generated at a rate of > 1 Hz, easily pushing up to > 10 Hz through use of smaller ROI sizes. Regarding image acquisition software, SRRF-Stream is readily available to SDK users and has also been made compatible with the MicroManager (Open Imaging) open source microscopy software platform.

Dr Colin Coates, Andor’s Imaging Product Manager, said; “Andor has a shared vision with that of the Henriques lab, which is to make super-resolution microscopy widely and easily accessible to all. SRRF-Stream makes a significant leap in that direction, working extremely well with standard widefield, TIRF and spinning disk confocal modalities. The combination of SRRF-Stream and Andor’s recently release iXon Life EMCCD represents a highly cost-effective way to unlock powerful super-resolution from existing conventional fluorescence microscopes.”

Dr Ricardo Henriques commented; “We are delighted to partner with Andor in the SRRF-Stream development. We have received a lot of very positive comments about SRRF due to the fact that it can achieve remarkable resolution without requiring specialized photo-switchable fluorophores, and with light levels of approximately 106 times lower than that required by standard localisation-based super-resolution techniques. We are extremely excited to see SRRF-Stream operating in real time, rather than as post-processing. Having thoroughly tested SRRF-Stream in our own lab, we are very impressed by both the workflow and also the ability to now utilise larger fields of view for live cell super-resolution. By seamlessly combining the SRRF algorithm with the high-performance of the iXon, we have accomplished the world’s first super-resolution camera for fluorescence microscopy.”